When working on this new site I wanted to drop IE 6 support, mainly because I couldn’t be bothered with all the extra work it was going to entail. But before I decided to drop support, I decided I’d have a look at my old sites visitor stats just to be sure that it was a small enough percentage of my visitors that it wouldn’t be a big deal.

Not surprisingly I found that IE 6 users accounted for only around 4% of my sites total page views, also unsurprisingly firefox was the most popular browser for visitors of my site at around 28% of page views. However what did surprise me was that the second most popular browser to my site was Opera mini with over 20% of page views. Now in hindsight this makes sense as most of this sites traffic comes from people downloading uTorrent mobile, a j2me mobile phone application, however I had never really thought about optimizing my site for mobile users, or really even testing that the site looked okay in mobile browsers. So with this knowledge in hand I decided to use the time and effort that I would have had to spend on hacking in support for IE 6, to make some of the pages on my site more mobile friendly. Now if you visit the apps pages on this site using a mobile device, you will see a skin that is more optimized for small screens ;)

In the classic novel ‘Walden’, Henry David Thoreau went to live by himself for over 2 years in a hut near the secluded Walden pond. He did this, not to live in total isolation, but rather to live at arms length from society in a simple largely self sufficient manner, in order that he could look upon his own life and the lives of others with a greater objectivity and understanding, or as he more poetically put it.

“I went to the woods because I wished to live deliberately, to front only the essential facts of life, and see if I could not learn what it had to teach, and not, when I came to die, discover that I had not lived.”

Now in 1845 it was hard enough for him to achieve this goal, and now it is almost certainly impossible in 2010 to live in isolation, at least in the traditional sense. But what of the the meta lives that we all live out in various online communities?

In the beginning, the web was intended to be a platform where most people would self host a (largely static) website, over time this has evolved (particularly with the advent of web 2.0) and now we have a situation where the vast majority of internet users communicate through a handful of large sites run by a third party (the google, facebook, myspace, digg, twitter etc.).

I see a definite parallel between this loss of independence online and the loss of independence bought about by modern society. Now there are a number of good and valid reasons for this happening, the main one being that over time people tend to specialize as it makes society more efficient, and we resort to trade to fulfill the needs which we don’t have the skills to do ourselves.

It makes sense that most non-technical people wouldn’t develop or host their own personal site/forum/blog, just as I wouldn’t consider trying to generate my own electricity or grow my own food (well I have considered it… but I’m probably not going to actually do it). However as someone who does have the technical knowhow, it begs an interesting question: Should I bother with the hassle, or should I just sign up to facebook?

It’s not that I have anything against facebook or other web 2.0 services, but like Thoreau before he went to the woods, I’m not really sure whether this loss of independence (and by proxy loss of privacy) is a good or bad thing, but I’m willing to stay out in the wilderness for a while longer in order to make up my mind.

Ahh, I love the smell of a fresh blog post in a shiny new website. Will no doubt be fixing up issues and migrating content etc. for a few days yet. but most of the hard work is over :)

While its true that the things you own end up owning you. In my case its much more a case of the things I create end up owning me. The more apps, websites and samples I put up online, the more time I have to spend updating those apps and making sure old posts still have the right links as I move files around on my sites.

Case in point I was recently looking over my ftp server logs and noticed a whole bunch of requests to non-existant yet very familiar sounding filenames. It turns out that I used to host most of my files on my home ftp server, but I’ve since shifted my files to apps.junkship.org but had neglected to update any of my old blog posts to point to the new files (I’ve since fixed all those links btw).

I also had to update Tarantula following amazon.com’s announcement that all Amazon Advertising API calls (formerly Amazon ECS API) calls will require authentication as of August 15th 2009. This meant that I had to remove the old web services code and replace it with signed calls to the REST API (Silverlight and Amazon’s SOAP API don’t play nice anymore).

As an aside, Amazon’s API requiring authentication is kind of a blow to open source apps that use it as to authenticate a request you need to include both your AWS ID aswell as your AWS secret key (which you are not supposed to share with anyone). This is obviously not possible in an open source app, or a desktop client application for that matter as it is possible for malicious users to get a hold of your secret key by dissasembling your binaries.

my apps site has also undergone a minor upgrade, mainly to improve performance and fix some long-standing bugs, but I’ve also added digg submission buttons for all the apps on the site.

www.junkship.net has also undergone some improvements, namely the image gallery which now uses jquery and json.net to do some fancy AJAX goodness.

hopefully thats enough to keep things from falling apart for the near future.

Who is getting all teh lolz?

As much as man strives to seek out knowledge and try to understand his place in the universe, some questions remain as mysterious and profound as the day when they entered our collective consciousness.

Well today is a momentous day, as it is now possible to answer with certainty, Who is getting all the lolz, and where are the lolz occurring? If you feel underwhelmed by the scope of this achievement, don’t worry, its true significance will dawn upon you in the coming weeks.

lolmap is (Update: was) an application that uses the Google to find and geolocate the sources of the most popular lolz on all of the internets. Use it wisely, because after all internet lolz are serious business. 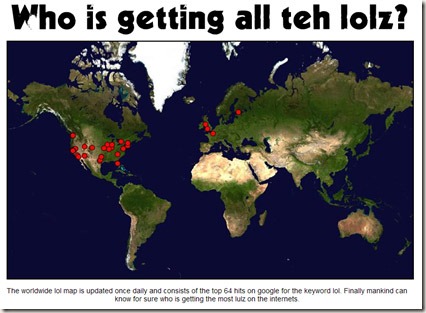