Regarding the reconstruction of a site with additional dynamism

Of late I’ve done a redesign of the home page for one of my side projects Junkship. While most of the site was simply static content that I migrated from PHP to asp.net on a new hosting environment, I did add a few new spiffy features around the sites image gallery. Because I’m not a fan of the bloated ASP.NET AJAX framework with its update panels and such, I went for a light weight approach to adding Ajax functionality (I would have liked to redo the whole site using the excellent ASP.NET MVC framework but alas my webhost only supports asp.net 2.0 sites). 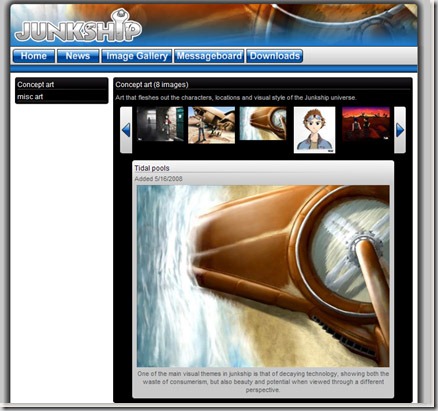 All Ajax postbacks are done using the prototype library which provides a simple and clean means to make Ajax requests to the server, at which point the server renders the desired controls and sends back the html, which prototype can then inject into the page DOM to be rendered.

Returning html controls from AJAX postbacks has a few nice advantages over returning raw xml data that has to be parsed and rendered on the client through JavaScript processing. Firstly it reduces the JavaScript processing that has to be done in order to update the page, as all the client has to do is inject the html subtree into the DOM rather than build its own by picking bits from the response xml. The other nice advantage is that the control rendering only needs to be written once on the server side, not duplicated on the JavaScript side.

An issue that comes up when designing Ajax enabled pages is the issue of the browsers back button, namely the breaking thereof. For my image gallery I wanted the back button to take you back a step, but not necessarily to the previous page as you can browse between many images on the same page via Ajax calls. To make this possible I tried to write my own solution by injecting anchor tags into the page via JavaScript, which worked…. on firefox and not much else :). I decided that surely someone else must have already written such a framework, but done a better job and made it cross browser, and it turns out I was right. Its called the RSH framework (Really simple history) and it allows you to specify when you would like to create a snapshot of the page that you would like to return to when the user uses the back or forward buttons. You can add as many of these points as you want and there is a callback system which notifies your JavaScript of page back/forward events and allows you to restore the desired page state based on the snapshot data. It works really well in practice (though I couldn’t get it to work on Safari which isn’t great because I use safari a lot now on my ipod touch) and means that the page behaves as you would expect.

You can view the gallery (and my awesome artwork :)) here 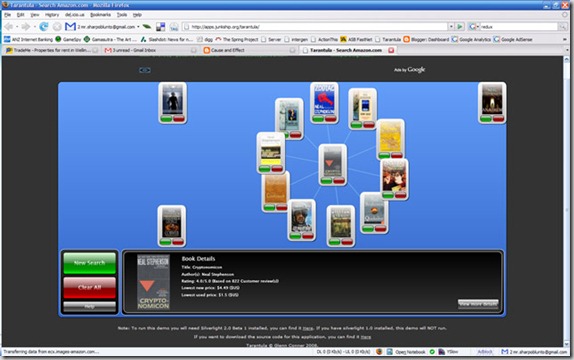 Now This was easier said than done, not because silverlight 2.0 is difficult to work with (compared to the alphas its a breeze) but because pretty much everything has changed.

The addition of user controls (no need to create custom text boxes anymore!) has meant that the xaml markup is a lot closer to what you’d find in WPF, with grid and stackpanel layouts, control styles, and control templates. This means that you can now separate style from structure in the xaml much more effectively and apply consistent styling to user controls. Unfortunately there is a lack of events that control templates expose, for example on mouse exit is not exposed for button templates meaning that fade out effects on buttons are not possible without custom code/markup.

Whereas before silverlight app’s were deployed as a collection of DLL’s and xaml files, they are now deployed into a .xap package, which is just a zip file containing the DLLs, but its a lot tidier and shrinks the download size for silverlight app’s.

Web service support has drastically improved since the alpha releases. In 1.1 cross domain http requests were not allowed meaning that in order to create a silverlight mashup utilizing external web services you had to actually implement a server side web service proxy to the external services. This was a huge hassle and has thankfully been done away with in 2.0 as you can now make cross domain requests provided that your domain is permitted by their cross domain policy file. Another annoyance in 1.1 was that only JSON web services could be consumed. this has been changed and now it is possible to consume WCF and standard SOAP web services. 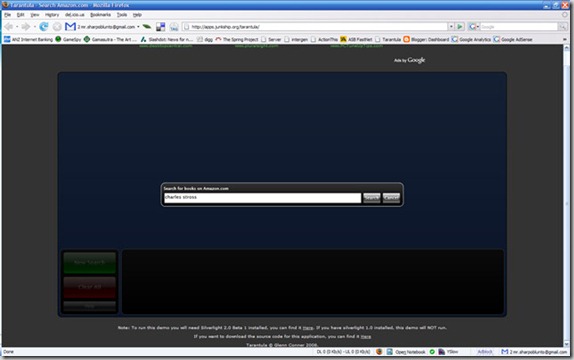 The result of all these changes was that I had to pretty much rewrite all my xaml, and the back end web service code. However thanks to the wonders of the Model View Presenter (MVP) pattern, In particular the Passive View variation of MVP I didn’t need to change any of my application logic. The other great thing about the Passive view pattern is that because the View can easily be implemented as mock objects (using Inversion of control and dependency injection) the controllers can be completely unit testable (though I was to lazy to implement any tests :)).

The final result is that my application is functionally identical to the original application, though it was much easier to get it all up and running this time than it was the first time, Silverlight is progressing nicely and I am looking forward to the next release. You can find my application here and source code is available for download here

I done a fair but of hacking around with the lua scripting language in the past, and while my motives for doing so were oftentimes questionable the fact remains that I learnt a few tricks that make embedding and using it easier.

As a language lua takes a "less is better" approach and instead provides the tools for you to extend its functionality rather than bloating the core distribution with stuff that isn’t really necessary. As such you’ll need to add some of that bloat yourself :) Henceforth I will be making the dubious assumption that you are familiar with the basics of embedding lua with c++ applications and get right into the meat of things.

Getting a lua stack trace

however wouldn’t it be more useful to get a full stack trace to give you more context as to where and why the error occurred? Luckily lua includes a nifty mechanism for hooking into events during script execution and while these can be used for all sorts of extremely cool and powerful things, I’ll be showing how you can use these events to build a call stack.

firstly lets create a list of strings (we’ll be using it as a stack…),a new lua state and hook up some events to it. The lua _sethook function allows you to hook in a number of events and provide a callback function to call when these events occur. In this case we want to be notified whenever a function is called (LUA_MASKCALL) or whenever a function returns (LUA_MASKRET)

This should allow us to build up a callstack by pushing information on the last called function onto a stack, then popping the top off the stack every time a function returns, simple eh? now on to the implementation of the callback function

So when a lua script encounters an error the contents of the _stack variable will contain a full stack trace up until the point of the error, neat eh? (the cryptic "Sln" parameter for the lua_getinfo function specifies what fields of the lua_Debug struct to populate, see the lua reference manual for more information if you’re interested)

NOTE: You’ll probably only want to enable this stack tracing for debug builds of your applications as there is a performance hit in hooking into these lua VM events.

At some stage in the future I’ll blog about my c++ LuaState class which wraps up the process of creating, loading, running, debugging and cleaning up lua scripts in a nice OO fashion but until then enjoy your new-found stack tracery.

why do people split movies into 700mb blocks?

For the love of god people, its 2008, I haven’t burned a CD in at least 3 years, we all have hundreds of gigabytes of disk space, USB flash drives which hold multiple gigabytes, and high speed wireless LAN connections in our homes… So why is it that people still distribute movies split into 700mb blocks? who actually needs a movie to fit on a CD nowadays?

For me one of the most annoying things in the world is for a great movie to stop halfway through, right when you’re immersed in the story and atmosphere, abruptly forcing you back into the mundane drudgeries of reality to get up off the couch, trudge over to the PC, find the second movie file and hit play. Its not that its a huge inconvieniance, its just that with today’s storage technology we can quite happily distribute movie files in one multiple gigabyte file, using the 700mb CD storage limit is completely unecessary.

So anyway, whenever I get a movie split into ridiculous 700mb blocks I insist on merging them into one single file, VirtualDub is a great tool for this as it allows you to do a direct stream copy and append the second file to the first without having to re-encode the video or audio streams. This turns a job that can take upwards of an hour down to a few minutes and also means there is no loss of quality in the source material.

The source for this program is available here

After owning a motorola v3x for the better part of a year it finally dawned upon me the other day that it runs Java applications therefore because I know java (well I hadn’t written any in over a year, but hey its like learning to ride a bike right?) I could write an application for my phone. Turns out it was pretty easy to do, I just downloaded the Motorola Java ME SDK v6.4 for Motorola OS Products which includes a plugin for the java eclipse 3.2 IDE and I was able to use the software simulator (image below) to debug and test before deploying onto an actual mobile device. 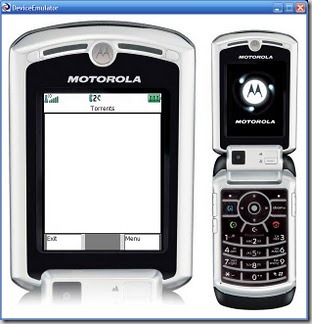 So with everything set up I needed an idea for an application, my first thought was toward some sort of remote control device for my PC, this idea eventually morphed into a mobile monitor/control for bittorrent downloads. Since my phone is capable of making http requests It would be a matter of writing or finding a server application that my phone could interact with which would in turn control the bittorrent client.

I already have utorrent set up as a service on a dedicated machine, so It was a matter of finding something a way to expose utorrents functionality to the web, luckily for me utorrent has a webUI component that allows you to view and control your torrents via a web page from anywhere in the world. So far, so good, but it gets even better. The webui also has an API which returns data in JSON format.

So with utorrent and the webui all set up (heres a good guide here) all I had to do was write an application which called the utorrent API and boom, remote torrent action on your mobile! Of course it was easier said than done, but on the whole J2ME was pretty easy going and it didn’t take long to write the mobile client. The most difficult part was writing a J2ME compatible API for accessing the utorrent webui web services. Below are a few screenshots of the finished application. 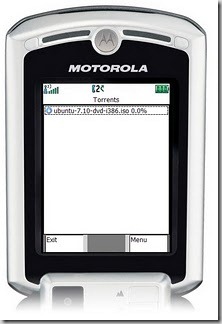